Main source of inspiration: prints that Ned made of a shoot we had with Candice a few weeks ago.

Shopping: This had been an annoyingly expensive week - I spend 30$ on cream paper hoping it'll work with my printer, it hasn't then eventually I broke and ordered the paper I already know works form amazon, since staples discontinued having it. The shipping was expensive and now I have to wait...

Disappointments: Not finishing a lot of the projects I was planning for this week.

OK, so lets see how I did with this weeks goals...

1. list a new item everyday - This really didn't happened this week, I started working on the minor arcana deck and it took most of my free time. I renewed some items but actually listed only 2 new items. The fox and A valentine's tarot deck.

2. Try and get the cream paper I was using originally for the tarot - I tried 2 very fancy type of paper, however the ink just doesn't seem to stick to them too well, and the black imprint parts of paper it shouldn't. They were unusable...I finally located a supplier through Amazon, shipment was really expensive and that sucks! however I ordered 3 packs so that's enough for a lot of tarot. I will have ot make up some project to use the extra fancy paper though. 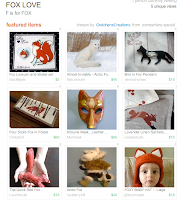 3. Make another fox and get some red felt for a weasel like fox and make one - I made the weasel-like fox, it's still in the store. But I didn't make another big fox yet (so that's half of a goal achieved I guess)

4. list at least one art print \ drawing \ painting - nop, I couldn't bring myself to it, I'm going to make that a monthly goal, hopefully, I'll get a little more brave next week.

6. Write a blog review about another store - nope, not yet...

7. Get those minor Arcana cards going! - I did really good in that one, I finished all the illustrations and scanned them and the first deck is in production now. 14 illustrations! that was massive... I hope to start the next suite (which will probably be the wands) this week.

So what do I have in store for next week?!

1. seem like the slow period of the end of January is finally lifting, or at least I hope so. So this week I will try to list something each and every day.

3. finish the cups set production and list it, and make at least one tarot deck of the major arcana this week.

4. get one treasury, at least, and be in one (hopefully).

6. write a store review about someone else's store.

Ow, that features Merimask's Fox mask! I love her stuff!