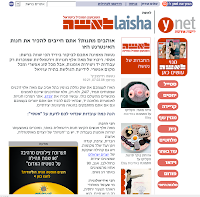 One of the things that I do almost every single morning is check the Israeli news on Ynet. Truth be told, I never used to read the news when I was in Israel and I don't even care so much now. I usually scan the site and read some recipes or a complaint about dating or about new books coming out. It's mostly just nice for me to have some Hebrew to look at and feel like I know what's going on over there before I start my Brooklyn day.

So today, I was doing just that, when the familiar face of Lester from Kitlane's store greeted me, I thought I was getting confused and clicked the link, to see a whole article about Etsy! I'm going to translate it in favor of people who are interested, but alas - can't read Hebrew:

Love gifts? You have to see this on line store!
By Natasha Haimovitch

Natasha invites you to visit the hottest craft fair on the net: Etsy. a 100,00 virtual stores that sells every type of art and craft, from everywhere in the world.

Imagine the Nahalat Binyamin market (a weekly craft fair in Tel Aviv) with a 100,00 stalls that are open all the time, 24/7. Not only that, but the stalls belong to gifted artists from all around the world. Now meet Etsy, a website that brings together art and craft stores, that you should know whether you are making things yourself or just enjoy creative ideas.

Some Facts you should know about Etsy:

The biggest:
One hundred thousand people opened virtual stores on the site, and sell their arts and crafts through it. there are "stores" of creators from Australia, USA, France, Canada, Japan, and other places. There is also a strong community of Israeli artists that exhibit locally made creations.
By the way, 90% of the exhibitors are women.

The most Ideological:
The person behind this relatively young site, only 2 years online, is a young gay called Robert Klain, only 27. In this video clip, on the site, Klain explain the moto and ideology behind the site and tells about the "art and craft revolution" that's happening online. The goal, Klain say, is not only to sell and buy art and save the go between fee, but that you'll connect to one another. As far as he's concern he's a builder of an online community.

The most Revolutionary:
The New York times stated over a year ago, that this the "cyber craft revolution". After December 2006 in which 2 millions items on the over all value of 4.3 million dollars were sold on Etsy.

The most Variety:
In the category dedicate to art for instance there are 8,368 pages of pieces in different medias. In the needle craft category, there are 8,461 items. If you don't feel like digging deep you can take a peek at the homepage that changes everyday and show new pieces selected by the sites editors.

The most Bizzar:
Long existing craft are gaining revived in a contemporary twist, edgy and very colorful. Yes, people still knits like grandmother, but instead of knitting a teapot cover, they knit thongs, instead of sewing a pillow, some artist would rather saw a Japanese style Manga robot and instead of crochet doilies you can find crochet bacon. Yes, it's decorative, yes, it's cool, and it's also a protest against mass produced consumption that kills individualism.

The most Martha:
The offices of Etsy are located in a 6 stories high building in Brooklyn, NY. They have a giant lab for arts and crafts that have all the tools and appliances Martha Stuart can only dream of.

The most popular:
You will not believe what one of the most successful items in Etsy is: cute illustration of Fifi the bunny wearing designer cloths by dolce gabbana and stella mccartney, 30$ for an original illustration. This store, though very popular is closed till April, it's worth waiting, Because those are collector items.

Congratulations to all the featured artist!