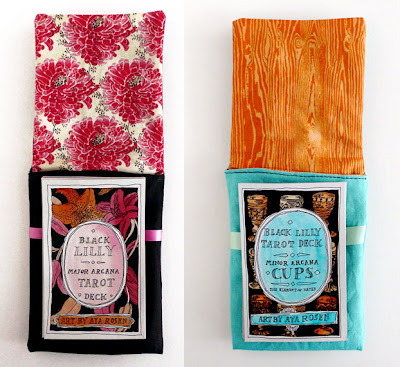 Ned's back was hurting and he was feeling sick yesterday, he spend the day in bed in a colossal sleep of 27 hours (well with a few breaks for food). It was weird to spend a whole day with barely a conversation with a living soul...

So, I listened to Israeli podcast, that I like, a show called "making history" by Ran Levi, which is about the history of scientific discoveries and invention, and i made Tarot for the store. the 3 decks I made before was gone, so it was time to make some new ones. The fabrics that I bought on Friday were great for color inspiration and I enjoyed the podcasts and painting, cutting and sewing.

Ned took pictures of them today, so now there's a new Cups Deck and a new Major Deck in the store.

Tonight, I was working on a gift for my sister, however, it came out so nice, I just had to keep it for the shop, I'll make her something else tomorrow...
Posted by Unknown at 12:35 AM