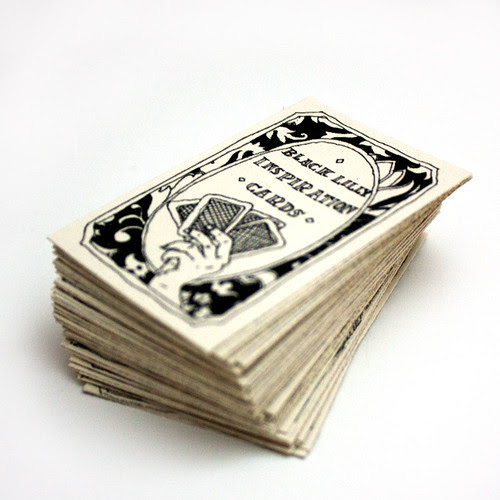 One of the things that I got really used to over the past couple of years is finishing every project before going to sleep. It's the advantage of making my own hours and working for myself - I don't have to wake up a certain hours on most days, and so every craft project or art piece can be finished before I turn in.

It means I get to see a lot of sunrise, and also that I wake up sort of confused and disoriented, but with a metaphorically (though very rarely physically) clean desk.

So tonight I was working on an order for new tarot cards, a very nice buyer ordered the 3 minor arcana decks and I decided to make 2 of each, one for her and one for the store.

Making cards is a strange process - I already done the design and also, know what works best color wise, there isn't that much creativity in making them, just a series of small tasks: printing, painting, cutting, mounting, cutting again. printing, cutting pasting and painting the instruction. cutting fabric, ironing, sewing, ironing again and putting it all together.

So tonight, at around 10:00 I was done with the painting of the cards and as I was mounting, I discovered that the mounting spray is basically empty, there's just nothing in it, I manage to paste one deck, but the second is still sitting on the floor having to wait till tomorrow, till the art store opens and I can get some more.

I really hate not being able to finish those, it feels as if they are looking at me...
Posted by Unknown at 11:17 PM 1 comment: 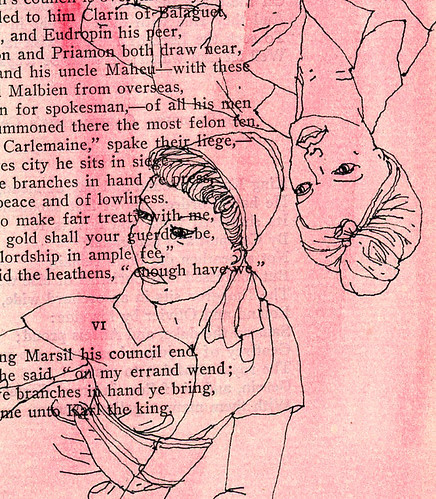 I dreamed about renting an apartment in Tel Aviv and buying a one way ticket, when I got to Israel, I realized that me and Ned never rented out our space or made any arrangements or a decision to move to Israel or anything, we were just there.

We walked around looking for the street we were supposed to live in, It was in my parents old neighborhood, we met my mom while riding children tricycles, she was gardening in a community park. She was ill and lost a lot of weight, which made her look younger and thinner then me.

She was happy to see me, but never said she was sorry for not talking to me for all this time. then she tired to convinced us to not rent that apartment after all and come stay with them at their house. We hugged for a really long time.

After that there was a different part of the dream about having sex in a subway stop while waiting for the train. 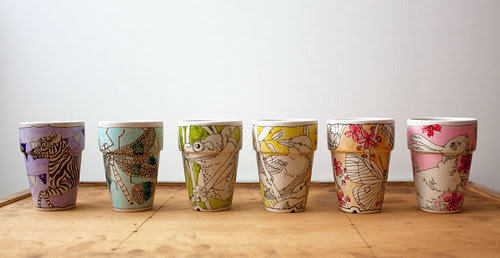 I just got an e-mail from a store in Boston who wants to carry some of my cups! I'm so excited and starting working on those right away, but I like how those turned out so much I decided to list them on my shop and make different ones for the Boston store. 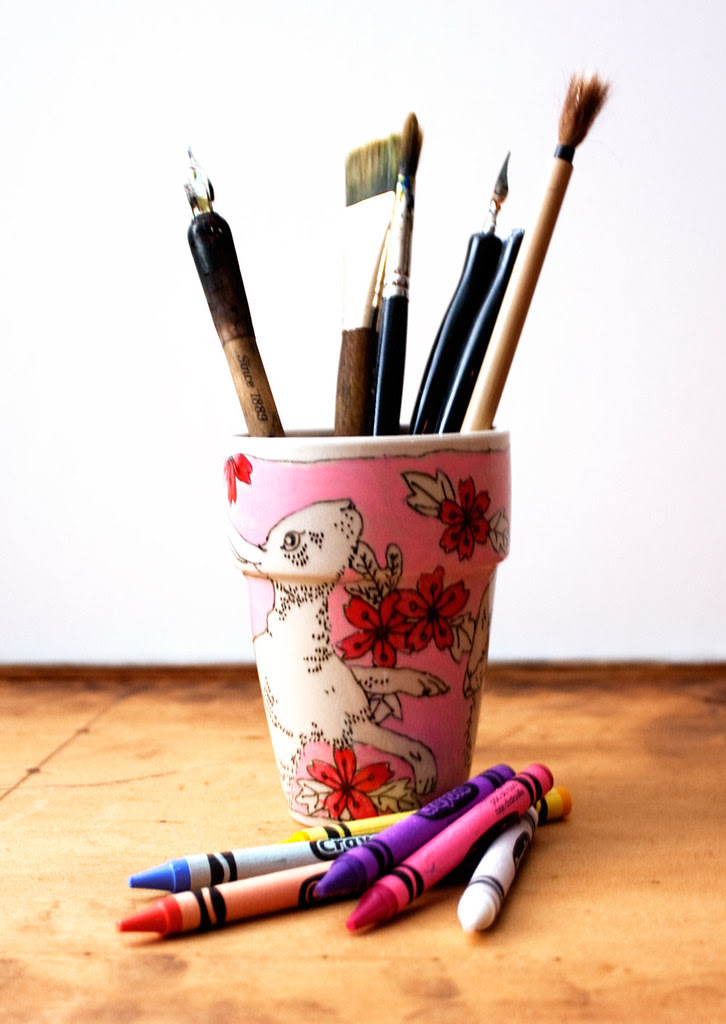 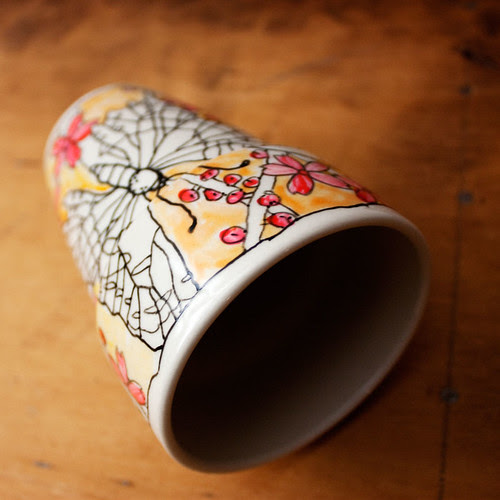 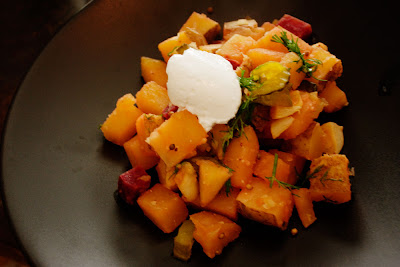 I already published one recipe for potato salad here before, but I guess it being summer finally (though you would not be able to tell that from the crazy storm outside now) and looking for something tasty, healthy and not too warming, potato salad in all shape and form is perfect for us.

I made a big batch and we eat half of it warm for dinner yesterday and half of it cold for lunch today. the texture and flavor changed entirely, it was almost like 2 different dishes. I think we both liked it better cold though it was really nice warm to. 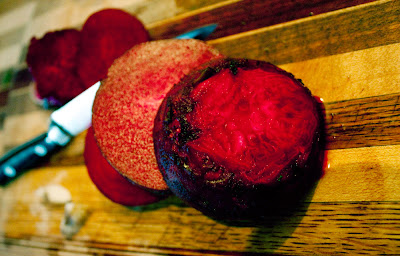 a pickle
some fresh dill

For dressing:
1/2 tea spoon of coriander seeds
1 tea spoon of mustered
juice from 1 lime
a chilly (I used a green habanero but a Jalapeno can work just as well).

Some yogurt for decoration.

- As you can see, no salt, we try to avoid it as much as possible, I know I eat too much salt already when I eat out, so at home, I cook without, if you don't mind salt, there should probably be about half a tea spoon in the dressing. 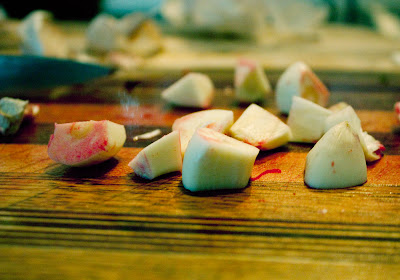 Dice the beat and potato to about 1"x1" cubes peal and chop the garlic into large chucks (cut each clove into 2 or 3 pieces) cook in water for about 20-30 minute till soft, but still chewy. Strain from water.

While the potato and beat are cooking, chop the dill (I used about half of a large pack, but you can use less) and the pickle to small bits.

Also, make dressing - I use a small glass jar, because it's easier to put the lead on and just shake it: Crush the coriander seeds with a spoon, to release their flavor (give it a shot even if you hate coriander, the seeds taste very differently then the plant) then add the lime juice, olive oil, and mustered, chop the chilly to tiny bits and add to the dressing, close the lead and shake the jar. 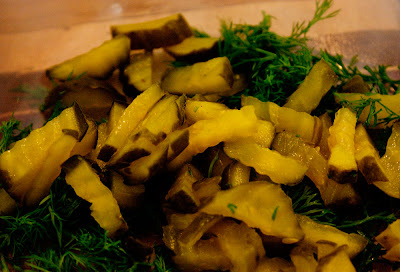 While the potatoes & beet are still warm and after you strain them, put them in a bowl (I use the tupperware they are going to be in late,r to save on dishes...) and pour the dressing over them, it'll absorbed right away in the warm potatoes. then mix with the deal and pickle.

On the plate, decorate with some yogurt. it taste really great together! 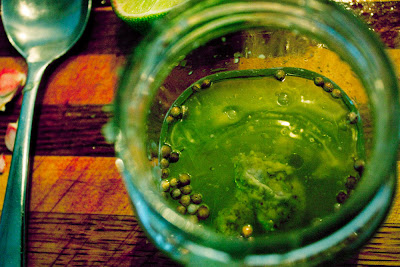 Remember a couple of weeks ago, I announced a rockabilly special blog raffle?!well it's time ot see who won it.

Only 12 people signed up for this raffle, which surprised me, because this is the biggest gift I ever offered on raffle, I wonder if it means that it doesn't matter what you offer as a prize on a raffle, or that this was simply not to everyone's taste.

At any rate - thanks for all participants, and congratulations to Cabootique who is the winner!

Stay tune! I'm going to announce the next raffle in the beginning of next week.
Posted by Unknown at 9:37 PM 3 comments: 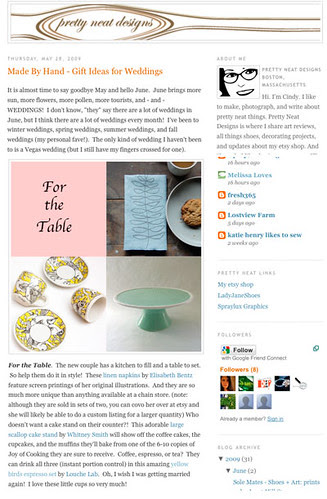 very cool blog feature in a wedding post - it's so nice.

Posted by Unknown at 9:40 PM No comments: