Not quite sure how it happened, but I did go to 6 shows in 2 days! realizing how much I like the artistic vibe in my neighborhood even though I rarely take advantage of all the places to see art around here, it was nice to be out and about and get this feeling of saturation, from seeing so many different artistic endeavors.

This was my least favorite show of this art marathon, it was ery minimalist and conseptual, some combination of rocks, carpeting, sticks and other natural and non natural materials. Mostly, it felt like it was put up the day of the opening and thought of that morning. It wasn't very esthetically pleasing, but at the same time I couldn't see any other substance to it. the gallery is very small and it was very crowded, me and Ned left after 5 minutes or so.

The second gallery was just as small and twice as crowded, but there was a nice feeling in the room, people were talking and laughing, and the art was really nice. It was a series of paintings on paper of newspaper clipping, I felt like each piece was beautiful, but the whole collection together and how it was set in the space was creating a whole that's stronger then each piece separately.
Ned run into an old friend \ neighbor artist who was there who he haven't seen in a few years, who I heard about and never met before. 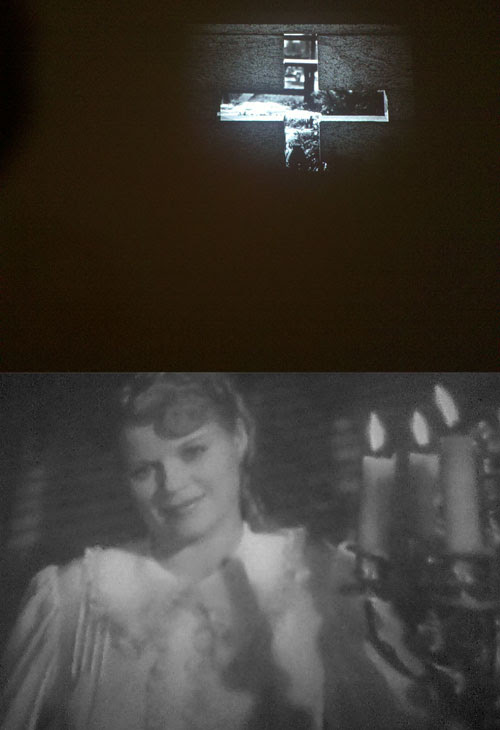 When I went into the next gallery, my first reaction was "Oh no, it's video art" usually, I really don't like video art. It was toward the end of the opening and the gallery was pretty empty. After a while, I actually really got into it, and I found 2 out of the 3 pieces really interesting and beautiful (the 3rd was a 45 minute film) the first was a series of beautifully shot photographs documenting a trip to somewhere in east Europe, with portraits of people met on the road, landscapes and road signs - it had a really strong nostalgic feel, that was almost fairy tale like even though it was painfully realistic at the same time. The other piece was a sort footage (apparently from a German WW2 cinematographer) of a beautiful woman putting out candles, then played backwards so that she blows the candles back to light.

I got home feeling so saturated, I couldn't fall asleep till 3:00 AM, then crushed with my cloths on and the lights on, with an audio book on that kept going in and out of my dreams. 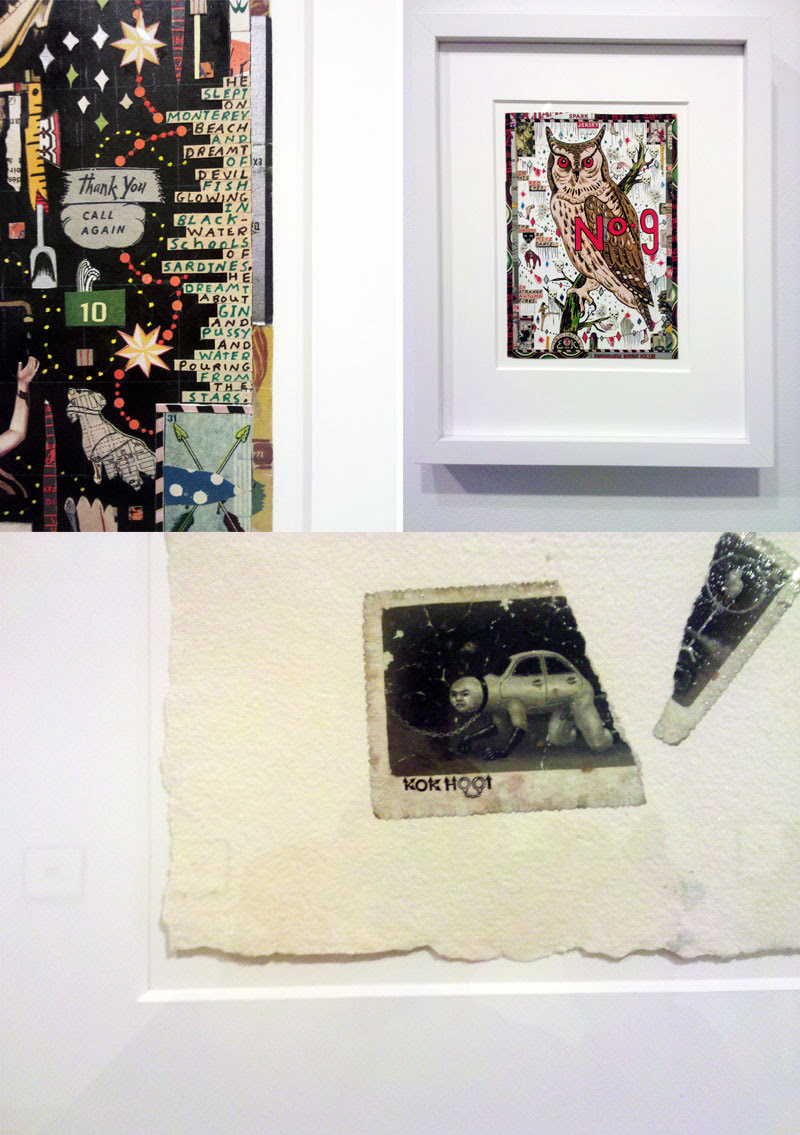 The next day, Ned was heading to the gym, and I was walking toward "blackbird", stopping at Pierogi - one of my favorite galleries in the neighborhood. They didn't rail me this time! there are 2 shows there now, and both are wonderful. Being that it wasn't an opening, I had the gallery to myself which was wonderful! one show was of small colleagues, very colorful and condense, with a lot of hand written type, and small images in the mix. they all looked like freak show posters, or strange ads from the 30's, but were very personal in content.
The other show was made to look like tiny old photographs or Polaroid transfer, but instead of photos, there were tiny illustration telling an odd story of some car-person-animal hybrid, which had, sex, violence and racial issues in the mix.
Both shows had a lot of sense of humor while, in their very different ways, were also very dark. This was the best show of the weekend as far as I'm concern. 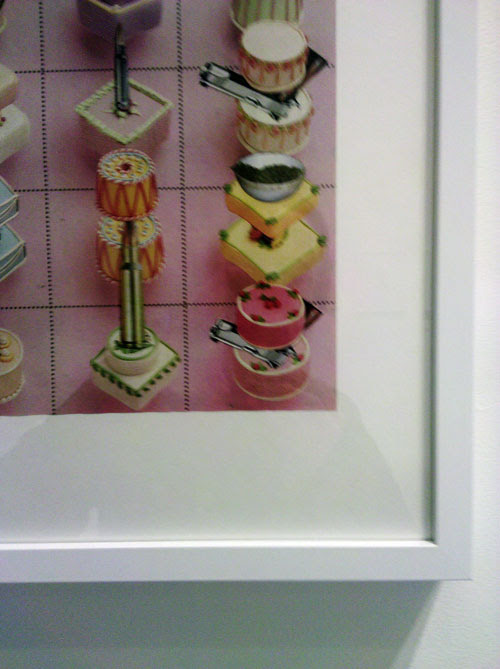 I went to blackbird and draw for 2 hours, came across a friend, then Ned and I went to brunch at Diner, then, on our way to another opening, we saw a gallery that had something that looked beautiful from outside, so we went in. What I thought was very delicate looking botanical drawing, turned out to be computer print out of hexagrams and skulls and suck like done with typing different letters and keyboard signs. On the other side of the gallery, what I thought was small acrylics in bright colors, turned out to be colleagues that to me, never managed to overcome the materials that they were made of ,and the combination of imagery didn't feel interesting or original enough to capture my attention. There was a short video piece that was somewhere between creepy and funny (in a good way) but really nothing to get to excited about. 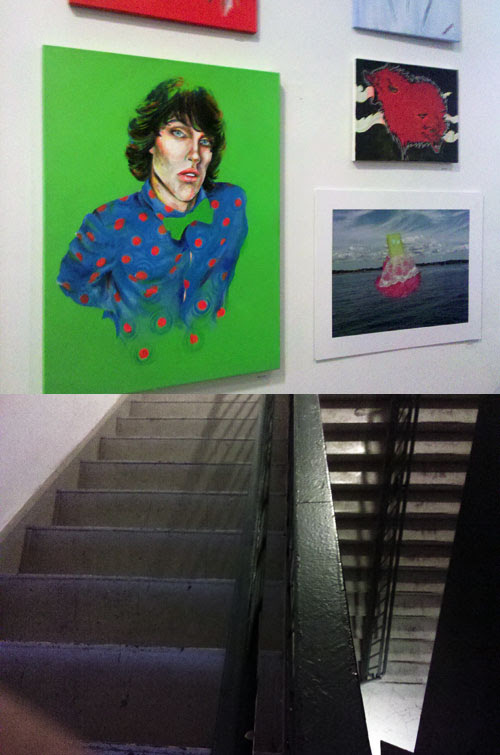 I've seen the "williamsburg art & historic center" building a couple of times from outside and always wanted to go in, and so their group show for the year was the perfect reason to check it out. And as I suspected - it's beautiful! really, the space and stairs and molding are so cool, as well as the strange collection of furniture in the first floor and the strange looking bathroom. The whole place is very "Alice in wonderland" like - small spaces leading to big spaces and not quite sure where to go or how to get there kind of a building. the pieces in the show run between total amateur and bad to beautiful professional looking art, some was boring, some was awesome, but the room just took over and made almost everything look wonderful.

I'm so so happy ot be home now though and not having to go out again tonight!
Posted by Unknown at 4:34 PM