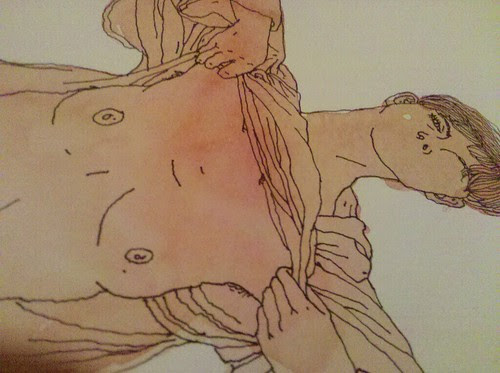 Had this idea for a drawing last night before going to sleep, decided to try it in the small sketchbook before going for a large time consuming version. It's about 75% done now, but I still don't know what I think about it and whether this is going to be tried on a larger format piece or not.


Ned's doing some light tests tonight, for a shoot in the beginning of January. he's shooting me, changing the lights and shooting me again.

It's very strange to look at my face in the photos. I feel like I grew so much older in the way I look in the past few month, I don't know if it's due to winter, or loosing some wight or just from growing older, but I don't look like a girl in photos anymore, not even like a young woman, not like an old woman exactly, but definitely not like a young woman anymore.

I sort of wish it wasn't so,I'm halfway heart broken about loosing some of my youthful look. knowing that this will just get worst with time doesn't make me feel any better about it.
I never considered myself beautiful, and yet, I guess I'm pretty vain, it's hard to think of myself as old.
Posted by Unknown at 2:11 PM