Everything seems to be going so fast those past couple of days, and at the same time, the beginning of the week seem like a lifetime ago. I can't remember when i last wrote in this blog, though I'm sure it wasn't that long ago. Between facebook and flickr it feels sort of strange to report about everything that's going on again, but I think that it'll clear my head a bit so I'll try and write some of it.

It seem that all this effort to go out more, socialize and interact with people is starting to pay off, also, it really helps me be more friendly and conduct my online work interaction better. It's also at least in part thanks ot Bob, the guy who's the teacher at the Sale's class Ned and I are taking.

So, there is a lot of exciting news!

First of all, I'm going to teach a class in etsy next month, it's going to be a demonstration of drawing on cups and will be broadcast in their chat, so people all around the world can follow! the coolest thing is how once thing led to another with this - I did an order for the company who makes the paints I'm using then the nice woman from the paint company asked me about the class and of course I agreed. It's going to be wonderful! though I'm just going ot not think about it so I don't get too stressed. 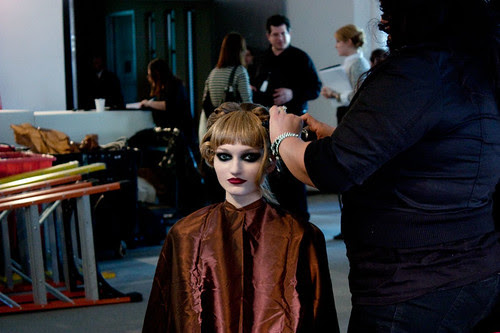 Second, Ned and I just had a really great meeting at a huge advertising agency today, with the guy who's the head of their print department, I don't know if it'll lead ot anything (though if id does that would be the best thing in the world) but it was really great to sit in am eeting and feel like I have my shit together.

Third, Ned and I are shooting some of the fashion week backstage shows - we did one on Thursday and another one tomorrow, I've had an excellent time on the first and got massive amount of photos that I like. Tomorrow we are shooting in the Briant park tents, I'm a little nervous, hoping we will not have problems with getting in, and hoping to have an amazing time, and take a lot of photos.

Also, I just got a new lens and made banana bread today (first attempt at real baking in oh, maybe 6 years...)
Posted by Unknown at 12:37 AM

This is so awesome Aya! It sounds like so many good things are happening, and even better- you sound so positive and happy! I'm really happy for you that things are going well!

SOOO great I wish I could be there in person for your class (when is it exactly ... it will be online as well, yes?) ... it was great meeting you and Ned last month