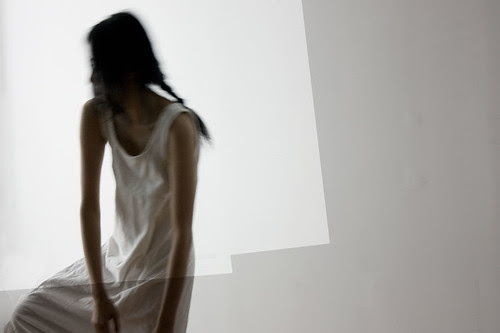 The train we were on got stuck today on the way to the city. It wasn't for too long, only a few minutes of standing, in a dark tunnel under the east river, waiting for a train ahead to move or something. After that it went on slower, until we were off the train.

I could feel myself not being able to breath, I know the air in the train would last a while, I know that really, the people stuck on the train aren't all going to suffocate and die, I know the train is just about to move, in a minute or two, but I just couldn't breath, I was sweating like crazy. Ned kept telling me that i'm allright and that we'll move in just a sec, and that I'm not alone. But non of it helped.

It's the book I'm reading now, in which a soldier get buried alive, it's Beau's funeral, viewing his body and knowing he can't breath, seeing the glistening glue the funeral home pasted his lips with, it's Gilad Shalit, in a smiling frame from that video tape from last week in the news sites, the tape I wouldn't watch cause the photo was bad enough. It's Ned's dad having to do more radiation because the tumor is not as dormant as the oncologist hoped. It's a phone call from my father telling me my sister's boyfriend is in the hospital.

Walking back home, from the city, still shaken, I'm looking at my owl tattoos, we got those in February, knowing that this year is going to be dark and difficult, and wanting a protective presence in our life. I'm thinking "the year of death is almost over" and I'm counting the months and trying to anticipate if by my langauge of symobls, it should end after a year from getting the tattoo, by new years or by Halloween.
Posted by Unknown at 12:49 AM

Wow, that's a really intense few days! Reading through this posting, even I started feeling tense and anxious.

I'm sorry that Ned's dad isnt doing as well as everyone wants him to be doing. He's really a fighter. I'm amazed at how much he's gone through and how he continues to fight, year after year. I hope the radiation does what it's supposed to do so he can be here for a lot longer.

I'm sorry to hear about your sister's boyfriend too. This is Ruthie's bf? What happened? Is he going to be alright? How is your sis?

THere's been a lot of good and also some bad things that happened in your life this past year. I hope that this next year is even better. More good, less bad.

Ruti's boyfriend is going to be fine though it was more serious then I thought. when my dad called to tell me he thought it was some flue complication, I talked to Ruti this morning and it turned out that he has some infection or a virus in the brain!!!! it sound horrible and for a day it was horrible, but he seem to be doing OK now, they put him on a lot of antibiotics and running a lot of tests.

Ned's dad might be fine after the radiation, it might be that this would finally be the end of the cancer, but also, it might not. I'm not sure when he starts.

I hate those days before halloween, it always feels to me like the world is about to end.